The Truth About Shared Web Hosting

Small-medium websites all over the world use shared hosting, because it’s easy to manage and extremely cost-effective for small businesses. In 2015, this continues to be the gold standard for entry-level sites.

Shared hosting, or any hosting for that matter, is never 100% fool proof and there is no such thing as 24/7 uptime.

While we’re on the topic of things that don’t exist, there is also no such thing as cheap “cloud” hosting, unlimited disk space, unlimited bandwidth, unlimited support, or unlimited anything when it comes to hosting. So before you jump on the shared hosting carousel, read the fine print. There is also no Santa Claus and no tooth fairy.

Even solid shared hosting plans have a 99 – 99.9% guaranteed uptime outside of scheduled maintenance. The one’s that say 99.99% are temporarily pushing their luck.

Translation: All websites and emails on a shared hosting plan will go down 0.1 – 0.01% of the time. That means, out of 100 days, you can easily be down for up to 24 hours, either broken down sporadically or for an entire stretch. Expect it.

Switch to a Virtual Private Host (VPS) or Dedicated server. For $60 - $500 more per month, depending on the size and scope of your website, you can really squeeze the chance of downtime and slowdowns to almost zero. Almost, because let’s face it, even Google goes down sometimes.

Then again, dealing with a larger more complicated site that warrants a bigger hosting plan presents a, excuse the pun, host of other maintenance issues.

Emails can be another challenge altogether. A shared server for vital email handling is a big no-no for serious businesses that require consistent email correspondence. If you’re using webmail or a 3rd party webmail client like Outlook with your shared server, and can’t possibly handle the occasional outage or delay? Switch to Google Apps for Businesses.

In the early days, GoDaddy didn’t even have cPanel. They had their own proprietary interface, which made website management unnecessarily cumbersome. The hosting was advertised as ultra cheap, but then the add-ons and upgrades were obviously where they got you. They’ll always get you some way or another.

When something looks too good to be true, it usually is. They had something like $1/mo hosting, but forced their GoDaddy banner to appear across the top of your website! If a customer wanted to remove that, they had to pay.

Support was decent for the time. Uptime was fair. Biggest issue was server speed. Website load time was atrocious, especially during peak hours.

Host Gator and Blue Host were very similar, so I’m going to lump them into one boat. Like GoDaddy, these two are just giant cheap server farms. They usually put you on a “fresh” server in the beginning, and then after some time passes, you start suffering, the usual ordeal.

The hook for many was the crazy amount of bloated and useless offers. Other than the free advertising credits, which you can get anywhere, they dazzled you with 1000 free templates, free “website builders,” and free coupons for piles of completely useless junk.

Once you pushed through all the gimmicky distractions, the biggest advantage at the time was cPanel. The support was ok, but only if you knew what you were doing. Website load times were agonizing, again, especially during peak hours, with sporadic outages.

Green Geeks was actually a decent, more honest hosting company. They did not advertise too many gimmicks, and they advertised clean, environmentally friendly, energy efficient servers, so that was a bonus.

Finally, minimal outages experienced and the speed was good. Bear in mind, it is also expected that in general, technology improves with time.

A huge disadvantage was they had locked the “full website back-ups” option in cPanel, presumably to save space or prevent customers from easily migrating away. Either way it was a nuisance, since back-ups are critical for any website and we need to be able to back-up websites easily. This was a total deal breaker.

After much research and head banging, we were off to a very strong start with Prime that decelerated just as quickly after about 8 months. Outages happened and support went ‘bye-bye.’

While we were up and running, uptime was great and support was fine. The strong start followed by the the inevitable chaos after x amount of time is a common theme in many hosting journeys. It's usually just a matter of time.

I cannot say much about inMotion’s hosting quality because we could not give them a fair shot. The moment we signed on, we received some ridiculous rate for migrating all the websites (thought it was supposed to be free? Especially with cPanel). Apparently bulk migrations are not, and the fee was astronomical.

We decided to give Green Geeks another shot since their hosting services suddenly seemed amazing after all the painful experiences. Pain and suffering is really relative here.

Furthermore, cPanel back-ups were permitted now, and a huge weight was lifted.

Then something terrible happened. After almost a year, sites went down for nearly 2 days straight. Knowing now what I know about shared hosting in general, perhaps I would let it slide. But at the time, it was a total, utter disaster.

Arvixe was the lesser of the evils of shared hosting. This was the first company that has lasted more than a year with minimal issues, which speaks volumes.

They scheduled internal migrations before a server got bloated, instead of after. This kept websites running smooth and fast rather consistently.

Their general honesty and approach to hosting were so refreshing. As a smaller company, they seemed to care more about quality over quantity.

We had a love/hate relationship with support. Their 24/7 support was available 90% of the time. Phone support was extremely lax, but for our purposes, online chat and email are perfectly fine. You had to stay on top of support tickets, but once they were handled, they were handled well.

You also have to have some hosting management skills and server knowledge to deal with issues effectively, otherwise it’s understandable why some may get very frustrated.

But alas, all good things come to an end, and what an ending it was. Arvixe was bought out by EIG in October 2014, and they completed the switch late 2015. EIG fired the amazing staff and outsourced their support to third world countries. The phones were completely eliminated, tickets went unanswered for weeks, and chat support became a joke. To top it off, the outages and slow-downs became unbearable. 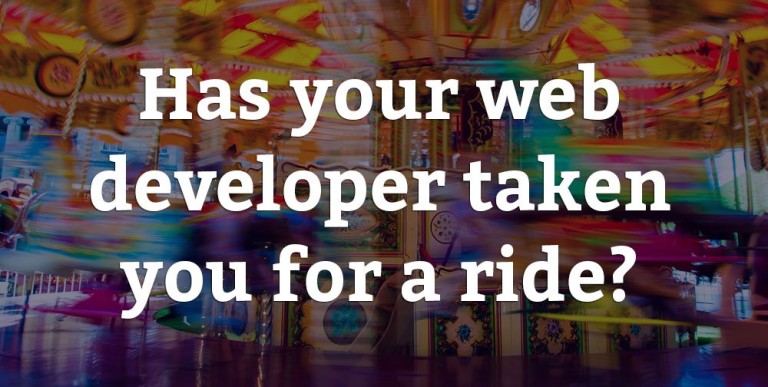 Before You Jump on the Web Developer Carousel…